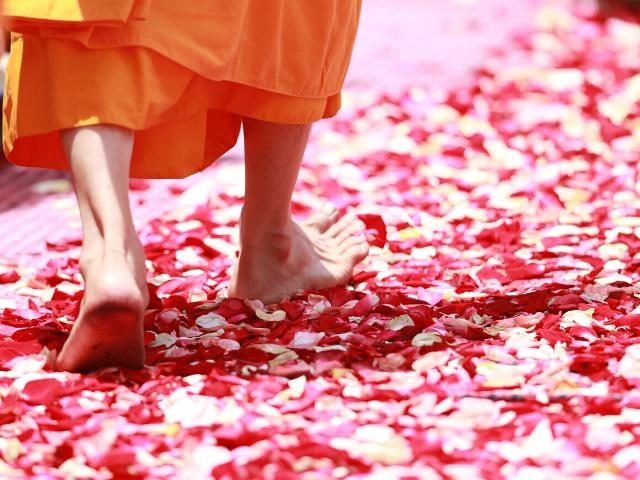 When an inner situation is not made conscious, it appears outside as fate.  Jung

Sometimes, past life therapy clients arrive at my practice and sigh: “I must have done something terribly wrong in a past life, that my life is so hard right now. It must be karma.” When I hear this, I rush to explain that this is not how the Universe works. For karma as a punishment – that doesn’t exist.

The concept of karma is very old and has its origin in ancient India. However, many Buddhist and Hinduist schools of thought use different definitions of karma. There is no such thing as one universal concept of karma.

Just as many other religious, spiritual and philosophical concepts, karma is often interpreted by people who come in much later and have biased views – views that are limited, limiting and not in alignment with the original teachings.

For instance, I remember being shocked by images of pilgrims in Tibet and Nepal, making their way up the mountains to the temples on their bare knees, humbling themselves and praying for their karma to be released so they can have a better life in the next incarnation. But this is not in accordance with human beings as equals and co-creators, taking responsibility for their own creations. Even the Buddha “told his followers they did not have to believe that karma exists and has effect on the next life: he let them decide for themselves. What he did teach was that man’s deeds are more important than his belief; when people do good deeds, it does not matter if they believe in reincarnation or not.’’ (Wikipedia.org)

However, many people still have a need for an outside authority that punishes and rewards. This is apparent in the way many religions are still interpreted and practiced.
For generations, our ancestors believed in a judging and punishing god, and the image of this stern god exacting justice runs deep. Subconsciously we still project the image of a judging authority on a teacher, a set of religious or philosophical beliefs, or a concept like karma. This way, we just take away the old judging deity and replace it with another.

In the sixteen years I have worked as a past life reincarnation therapist, I have not seen evidence of a universal system of punishment and reward, a wheel of obligatory rebirth once. What I have seen, is that people tend to punish themselves out of guilt or shame, and can so choose a next incarnation in difficult circumstances.

Furthermore, some people, notably “old souls” and “incarnated angels” tend to consciously choose incarnations in difficult families and hard circumstances. They do this in order to bring light and consciousness to darkness. That these choices bring their own kind of problems and hardship speaks for itself – but that is not a punishment from “above”.

One might also, through the Law of Attraction, create what one subconsciously believes, and attract situations that seem to acknowledge our idea of karma as punishment. We each create our lives and manifest what we believe to be true, but if we are not conscious of it, we can start to believe that there is an agency outside ourselves, like a deity or wheel of karma that brings us good or bad “luck”.

This principle can even manifest after death. If you believe in hell, you might get caught up in an illusionary hell after passing. This would be only part of your Multidimensional Self – the Higher Self or Soul resides always in the eternal now, in unity, and is completely free. Even parts of our Self that do get lost in illusions like that can be released and integrated by therapeutic or shamanistic techniques.

But isn’t there any kind of justice in the Universe then? You might ask. Of course there is. But not in the simple, straight-forward, cause-and-effect, punishment-and-reward form sometimes still presented as karma.

Normally speaking, people have a kind of inner moral compass. It is connected to our higher Being, our soul and Source, and tells us when we diverge from the path of love and integrity. The gnawing feeling this causes is the voice of our conscience. We can ignore that inner voice, but if we do that for a long period of time, there will come a moment when we no longer can. This is because we will no longer be able to create positive circumstances for ourselves with negative and destructive deeds and beliefs. We are confronted with our own negative creations. That is when we face the choice: Do I continue creating pain, or do I take the path of love and integrity?

When people diverge from the path of love, truth and integrity by choice, they will find it does not bring them fulfilment. In that sense, “evil” punishes itself. You do not gain true happiness by trying to get your way by force, aggression, manipulation and violence. Deep within, people who do wrong know that what they are doing is not in accordance with their own Higher Being, that resides in the bliss of Unity – and that discrepancy will haunt them until they become accountable for their deeds – to themselves. Having victim experiences can offer more insight –not as a form of punishment from a “higher” entity, but from the desire of the soul to learn, become conscious and enlightened, and gain insight in how the universe works.

In that sense, “good” is its own reward too: living in truth, love and integrity brings happiness and fulfilment. When you live in accordance with your own higher Being and Source, you are a conduit for your own beautiful soul qualities, the love of Creator and the endless creative energy of Source. Then you bring forth love, joy, happiness, beauty and growth for all. Is there anything more wonderful than that?

© Wendy Gillissen, M.A. 2018
This article is protected by copyright. No part of it may be used without prior consent of the author. You are welcome to share it using the social media buttons below. Thank you for respecting my work!