Home The Search for Tzanáta

Since part one of her series, Curse of the Tahiéra was published, Wendy has been working on the sequel: The Search for Tzanáta.
It has been released in June 2020 and is now available!
Support independent authors and order your copy from the publisher!
Or get it on Amazon Gillissen spins a fantastical narrative that seamlessly intertwines elements of fantasy with past life theories, dreamwalking, and human drama for an original, engrossing spiritual adventure tale.

The first book in the proposed trilogy takes raiders on an exhilarating journey of a young man to self-discovery and power of dream magic. When Rom, a young man shunned for his Tzanatzi ancestry, crosses paths with Yldich, an Einache Shaman, they embark on a journey which will change their lives and that of their people forever.

The second novel, the sequel to Curse of the Tahiéra, sees Yldich back to the House of the Deer after his seven year-long absence. And though Rom seems content living among the Einache of the high North, things are not as they seem. With eerily familiar ships appearing at the cost and mysterious disappearance of the last Tzanatzi, Rom knows he must brace himself for a dangerous face-off.

Gillissen builds a wonderful fantastical world, where dream magic feels right at home and the struggle for identity and security never ends. The spirituality stays at the heart of this series: Gillissen draws themes and inspiration from dreamwork and past life theories, deftly weaving the threads of dreamwalking into Yldich and Rom’s adventure while evoking the folklore and customs of the Einache and Tzanatzi, the two fictional communities.

In witnessing Rom’s journey to self-realization, readers are sure to find mirrors to their own experiences. The intriguing, unhurried, third-person omniscient narration deftly reveals a tapestry of magic and power of love and forgiveness. Questions of identity, self-discovery, life purpose, soul-life, what it means to be one with your inner self, and how decisions made in the past have far reaching implications give meaning and depth to the narrative.

The cliff-hanger conclusion resolves the major plot threads while leaving enough questions unanswered, raising readers’ fervour for the final instalment in the trilogy. Along the way, Gillissen deftly explores the value of seeing magic in one’s life as well as the honour of fulfilling one’s duty and responsibility toward others. This is a must-read.

A powerful story combined with rich and compelling characters

The Search for Tzanáta is the sequel to the highly acclaimed, award-winning debut fantasy novel Curse Of The Tahiera by author Wendy Gillissen. After seven years, the Harrad of the House of Deer, Yldich, returns to the Einache, bringing news of an upcoming invasion from the seas. When Yldich’s son-in-law Rom shares memories of his true-dreams where he sees the Tzanátzi armed for war traveling on big beautiful ships, Yldich alongside Rom, Eald, and Eldaric set off in pursuit of the land of Tzanáta. But unknown dangers lie in the Lands of the South, where Rom may soon have to come to terms with his past. Will Rom be able to embrace his heritage and find the Land of Tzanáta to save his people?

With a powerful story combined with rich and compelling characters, The Search for Tzanáta feels like a breath of fresh air. Author Wendy Gillissen seamlessly brings out the sense of wonder, awe, and adventure of her whimsical tale that all authors strive for, but few seem to accomplish. I am looking forward to reading the sequels as I found The Search for Tzanáta to be an enthralling read. I was particularly captivated by the close resemblances between the ways of the Einache and the culture of Native Americans. All the characters have distinct traits and personalities, with Rom’s arc being my personal favorite. Despite being a sequel, The Search for Tzanáta also works well as a standalone. I highly recommend it. 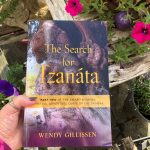 having read a synopsis of the first book. The characters born by Gillissen are experiencing internal struggles that are easy to identify with, and therefore it is easy to connect with them, making their growth and character arcs feel more tangible. “The Search for Tzanáta” is recommended especially for epic fantasy lovers, but readers who enjoy stories with magic, spiritual growth, and some subtle allegorical context would also likely find it to be a fantastic read.
Megan Weiss for Reader Views Awards

It was dusk when the Seer came to collect him. Rom had managed to wash and pull his tunic back on without pulling off his bandage.
‘Come,’ she said in a soft voice. ‘The Patáni council is ready to meet you.’
The young Patáni had built a fire in the middle of the ancient courtyard. They were passing along an earthenware pitcher, filling stone cups before handing it over to their neighbours. A hush fell over the gathering as Mýrtynn led him closer, guiding herself by her ears and feet.
‘Caleërte, Riórdirým.’ They spoke as one. Even though the evening was balmy, a chill drew cold fingers along his back. His eyes were pulled to the right, and he caught a glimpse of Elárym. The young Patáni leader’s face was a mask of self-control. Only his eyes betrayed a flicker of emotion. Rom swallowed and let Mýrtynn lead him to his place at the fire. A young Patáni girl to his left handed him a cup, her eyes big with awe. Elárym lifted his cup to the darkening sky.
‘Ayáa caltáno… to freedom,’ and the young people followed his example.
‘Ayáa caltáno,’ they murmured as with one voice before they downed their cups.
‘Ayáa caltáno,’ the voice of the Seer sounded to his left. She raised her cup to the sky, where the first star was peeping out. ‘To freedom.’ She downed her cup and opened her arms to include all those present. Then she folded her hands in her lap and began to speak.
‘This story,’ she said in a soft voice that nonetheless carried far enough to be heard in all corners of the old courtyard, ‘is for the benefit of the Keeper of Storms as well as your own. It is an ancient one. Many of you are part of this story, woven into it like threads on a loom. It is a story of beauty and glory, of sadness and decay, and the only jewels to adorn it are the tears of the Forlorn, and the Ones who still stand to defend them. The Patáni.’
Rom sat listening, his arms around his knees, his senses alert. Night covered the land with its velvet cloak of darkness, and the sounds of its creatures subtly filled the air. Invisible bats whooshed overhead hunting for their prey. It occurred to Rom that though Elárym had opened the Meet, it was the Seer who was in charge, albeit in a more subtle way. Whereas Elárym led the Patáni in matters of arms, it seemed to be the Seer who led them in matters of spirit. They listened to her with undivided attention, the youngest with half-open mouths, their dark eyes glittering, their unkempt hair falling in their faces, like feral children enraptured by the story-teller.

‘Once,’ she continued, ‘the Citadel of Tzanáta was a wondrous place. There was hunger nor fear, and the people danced in the courtyards at night, when the fiery sun had hidden her face and the lofty stars lit the dancers on their path.’ Her flowery style reminded Rom oddly of Yldich. He wondered if all storytellers were attuned to one great storyteller spirit, be they Tzanatzi or Einache. As she was speaking, the sky turned to black and the stars wheeled slowly overhead, glittering like the jewels in her tale.

‘The Search for Tzanáta’ is now available! Would you like to be informed of the third book in the series, ”The Lost Lands” and other news? Subscribe to Wendy’s newsletter.